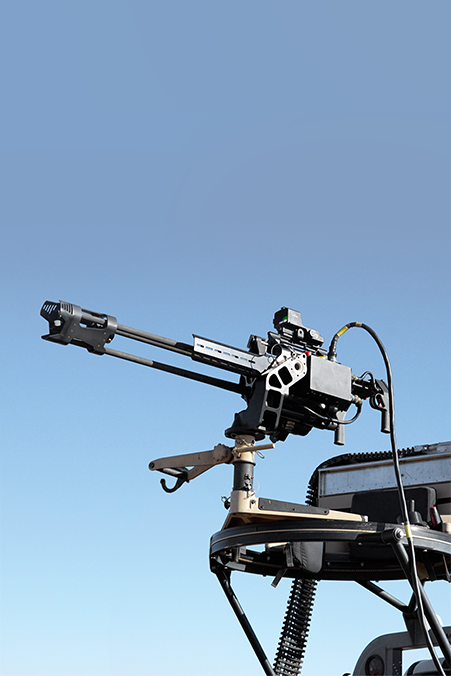 Dillon Aero is proud to introduce its newly designed 503D .50 Caliber Gatling gun to the world-wide market, bringing greater ballistic capability that carries the same level of reliability, ease of maintenance, and simplicity of operation as the M134D Gatling gun. Designed for speed and accuracy, the 503D is a true force multiplier in comparison to conventional recoil operated .50 Caliber machine guns.

A high rate of fire is simply crucial to achieve the shot density needed to suppress multiple targets in a short amount of time. The 503D is designed with a unique, tool-free, attachment interface, utilizing a custom fluid-damped buffer system to reduce recoil and provide weapon stability in crew-served applications, as well as fixed-forward and Remote Weapon System (RWS) applications. Resulting a level of weapon control which enhances the accuracy of first rounds, and retention on target throughout
the engagement.

Like the M134D, with its high rate of fire, dense shot grouping and weapon stability, the 503D embodies an ideal pairing of swiftness and precision. Dillon’s initial release configuration of this weapon is powered by the same combat proven electric drive and gun control architecture, that runs the M134D. This means commonality of numerous system-critical parts which already have a recognized track record of reliability, such as the drive motor, batteries, clutch components, and gun control unit electronics.